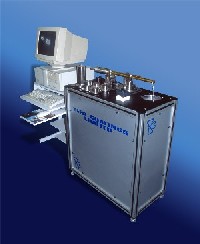 The pin on disc tester is used extensively to measure the friction and wear rate of low friction coatings such as diamond like carbon prior to coating actual components such as automotive valve trains. As the valve train in an engine is responsible for approximately 10% of the engine’s total energy losses due to friction at high engine speeds ( this increases at low engine speeds). Low friction coatings therefore increase the efficiency and lifetime of these components significantly. As the use of low friction coatings becomes more widespread so does the requirement for wear and friction measurement and hence the use of the pin on disc tester.