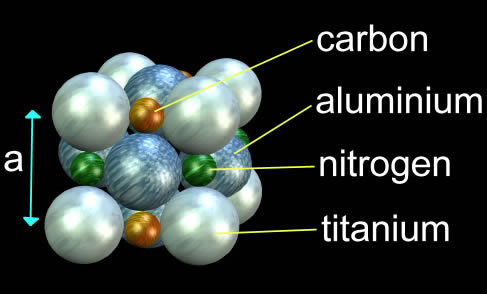 Hard PVD ceramic [relevant-to-adsense type=”start”]thin film coatings[relevant-to-adsense type=”stop”] – What are they made of?
Hard materials suitable for thin films are usually carbides, nitrides, borides and silicides of the IVth, Vth and VIth groups of the periodic table. The materials are formed by depositing metals in a nitrogen, hydrocarbon, or silicide atmosphere. It is thought that the ceramic compound is formed at the surface of the substrate. An example of such a hard ceramic is titanium aluminium carbo-nitride, TiAlCN.

Hard PVD ceramic coatings are used extensively in cutting tool applications because of their outstanding wear resistant properties. They have continually developed over the years but can be divided into four coating generations.

Hard PVD ceramic coatings – Single metal nitride PVD coatings e.g. TiN, CrN, ZrN
The first generation of hard PVD ceramic coatings were simple metal nitrides such as TiN, CrN and ZrN. These coatings have been deposited commercially since the middle of the 1980’s because of their higher hardness compared to uncoated high speed steel or cemented carbide. They have also an attractive appearance and therefore are also used in decorative applications. TiN has a yellow-gold colour, CrN looks like chrome and ZrN has a green-gold colour. TiN, ZrN and predominantly ZrCN are used to simulate gold in decorative applications such as watch cases or to provide a hard wearing underlayer for gold plating.

Hard PVD ceramic coatings – Alloyed elements improve oxidation resistance, e.g. TiAlN
The improvement in oxidation resistance was achieved by depositing other elements such as Cr, Al or Y at the same time as TiN. The addition of Al caused a stable aluminium oxide to form on the surface preventing further oxidation. Small levels of chromium increased the density of the oxide and yttrium tended to migrate to grain boundaries and prevented the substrate elements from diffusing up through the coating as the temperature rose.

Hard PVD ceramic coatings – The development of superlattices
Further developments increased the hardness and oxidation resistance of PVD coatings resulting in multilayers and superlattices. These are thin films formed by alternately depositing two different components resulting in a multi-layered structure. Multilayers are defined as superlatices when the period of the different layers is less than 100Å.

Superlattice coatings of materials with similar crystal structures tend to form columnar crystals which extend through the whole coating, provided that the thickness of the individual lamellae is sufficiently thin, typically 5–25 nm. One of the first examples of superlattice coatings was obtained by combining TiN/VN and TiN/NbN. This type of multilayered coating structure can improve the hardness, corrosion resistance, oxidation resistance as well as the toughness, compared to single layers of the same materials.

Hard PVD ceramic coatings – The recent development of nanocomposite coatings
A nanocomposite coating consists of at least two distinct phases: a nanocrystalline phase and an amorphous phase, or two nanocrystalline phases. The basic idea for developing nanocomposites is based on thermodynamically driven segregation in binary (ternary, quaternary) systems. This segregation results in self-organization of a stable nanoscale structure. The use of this generic concept led to the development of nanocomposite PVD coatings. These PVD coatings have nanometer sized grains and exhibit enhanced yield strength, hardness and toughness properties as a result of the well-known Hall-Petch effect .