The experimental set-up is simple (see below), but the ablation process itself is extremely complex involving the interaction between the laser and a solid target material, plasma formation and the transport of material across the vacuum to the substrate. 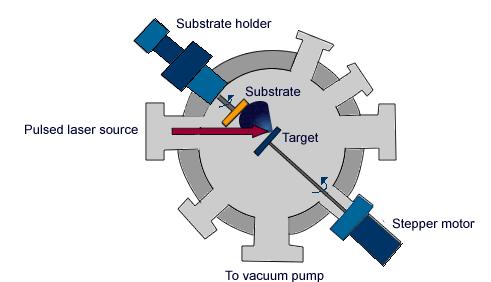 In basic terms, a high powered laser is focused onto a rotating target within a vacuum chamber. The extreme energy of the focused beam is absorbed by the small target surface area causing the breakdown of chemical bonds within the targeted region. This causes a few surface layers of the target to be ejected in the form of an ablation ‘plume’. The components of these layers, ( ions, electrons, atoms, radicals or clusters), travel at extreme speed through the vacuum chamber until they impinge on the surface of the rotating substrate. The properties and composition of the plume may evolve in this short time as a result of collisions between the particles within the plume and interaction between the plume and the laser. When the ablated material hits the substrate surface at high impact energies (typically 100 eV) the particles stick to the surface with reasonably high adhesion, and are compressed, forming a continuous film. Further laser pulses ablate more material and gradually the thickness of the film increases from a few atomic layers to microns. Other surface modification processes can take place during the deposition process such as implantation or sputtering. PLD deposited films are not as dense as those deposited by other techniques such as magnetron sputtering that deposit coatings atom by atom.