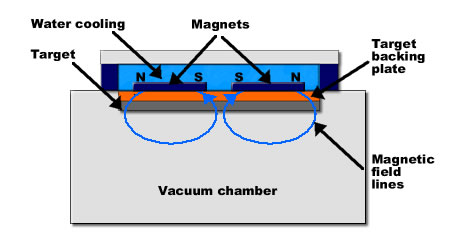 The Magnetron – How is it used to coat tools and components?
When power is supplied to the magnetron a negative voltage of typically -300V or more is applied to the target. This attracts argon ions to the target surface at speed. When they collide with the surface two important processes take place. Firstly atoms are knocked out of the target surface with mean kinetic energies of 4 to 6 eV- this is sputtering. To learn more about sputtering click the link. Secondly secondary electrons are emitted from the target surface that become trapped by the magnetic fields and undergo further ionizing collisions sustaining the plasma. Also during the sputtering process a glow is observed as can be seen below, this is caused by excited ions relaxing to a lower energy state and emitting energy in the form of light. Different elements emit the visible light at a different wavelength and therefore a different colour will be observed.

A magnetron in operation

The conventional planar magnetron has been designed such that a looping magnetic field round the inner and outer magnet pole pieces confines the plasma in a closed loop on the target surface.

The Magnetron – Further developments
Over the last 15 years or so magnetron sputtering systems have undergone considerable development. In a “conventional” magnetron a higher substrate ion bombardment, the number of ions hitting the substrate during coating (vital for hard dense coatings) can only be achieved by increasing the power to the target or decreasing the distance from the target. To overcome this problem the unbalanced magnetron was developed.

To learn about the unbalanced magnetron and further developments in magnetron sputtering such as the “closed field” magnetic arrangement click the links.