Scratch test – basics
A Rockwell diamond tip with a radius of 200µm is moved across the coated surface of a substrate at a constant velocity while a steadily increasing normal force is applied. The diamond causes stress between the thin film coating/substrate interface resulting in delamination or chipping of the coating. The normal force at which the first failure of the coating can be detected is termed the critical load Lc. 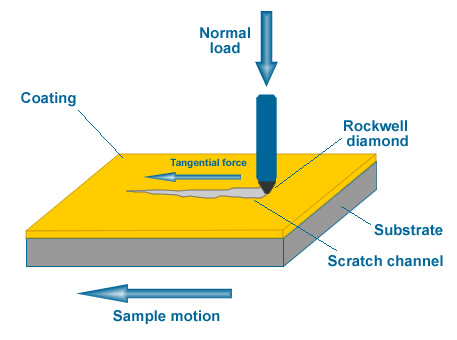 Scratch tester – Thin film coating adhesion failure
The typical scratch tester uses three methods to detect thin film coating failure; firstly a load cell is used to measure the change in friction, secondly acoustic emission detects and cracking and thirdly after the test is complete the scratch channel can be viewed using an optical microscope. The intensity of the acoustic emission is dependent on the type of thin film coating failure during the adhesion test e.g. cracking, chipping (cohesive failure) and delamination (adhesive failure). It is therefore good practice to always view the coating failure after the adhesion test using an optical microscope to confirm the critical load.